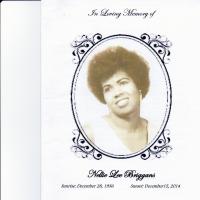 Nellie Lee Harriet Colman Briggans of Coffeyville Kansas passed away quietly at home December 15, 2014. Nellie was born on December, 28, 1936 to Maurice Coleman and Minnie Cecilia Smith. She was the sixth daughter of 8 girls. Nellie was formerly educated in the Coffeyville School System. Nellie went on to marry the love of her life Lawrence Briggans Sr. of August 6, 1955 this marriage was blessed until his home going November 19, 1990. Nellie worked various jobs, but her first job was a great…