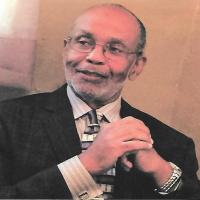 Pastor Wyatt N. Irving was the Patriarch of the Irving Family. He was a provider, a pillar, and a rock to all that knew him. He was born in Coffeyville, KS on June 15, 1950 Griffin and Dorris (Berry) Irving. He was called home to be with the Lord on August 3, 2020.

Wyatt was a pillar in the Coffeyville community. He worked for the City of Coffeyville, literally starting as a janitor in the basement of City Hall and worked his way up the ranks to become the Superintendent of Water and…