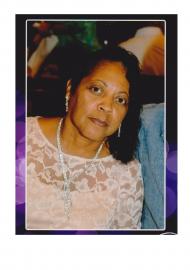 Camellia F. Watson-Jenkins age 60 aka (Midget), passed on January 3, 2018. She was born May 1, 1957 to Herbert and Willie Mae Martin in Coffeyville, KS. She attended the Coffeyville Public School system graduating from Field Kindley High School in 1976. She went on to attend Coffeyville Community College graduating with an associate degree.

She moved to Kansas City, KS in 1978 with her family and attended Mason Temple Church of God in Christ before moving to Parsons, KS in 1984.

During her years in Parson she was employed by the following organizations, Head Start as a teacher, City of Parsons in several department, and the Youth Crisis Shelter before returning to Head Start as a Case Worker. Camellia was the co-owner and bookkeeper of Watson Wardrobe Cleaners. She was faithful and active member of Watson Memorial Church of God in Christ until returning to Coffeyville, KS in 2014.

Camellia was preceded in death by her husband Ronald Watson Sr., parents Herbert and Willie-Mae Martin. She is survived by husband William Jenkins and children Kendra Tyler, Ronald Watson Jr. and Martin Watson and 6 grandchildren.

Service will be held Thursday, January 11th, at Watson Memorial Church of God in Christ located at 2215 Appleton Ave., Parsons, KS. Viewing prior to service from 9 a.m. to 11 a.m.

To the children and family of Camellia, I feel the pain of your lost, however, we know that your Mother, and my dear friend is in the hand of the Lord. I shall continue to pray that God comfort each of you in this time of sorrow and that you keep the teachings of your Mother close to your hearts. God first and everything will be alright.
May God Bless You All.

Earth Hath no Sorrow, that Heaven cannot Heal. To Bill, the Watson and Martin families, you are in my our prayers and have our deepest heart felt sympathy at this time. We feel your loss, not as you do, but nonetheless, we hurt with you. Midget, was such a sweet, loving and kind Woman of God, with her soft spoken self. I am Thankful she was a part of my life and got to know her. I am asking God to continue to comfort your hearts, souls and minds and give you the peace that passeth all understanding. She will be missed, but never forgotten. Love you all dearly.
Sincerely;
Vernie and Don Hill

With sincere heartfelt sympathy, I offer my deepest condolences to the Martin, Watson and Jenkins families in the loss of your beloved wife, sister, mother and aunt. She will forever be the cute little girl, across the street , with the big pretty eyes we called Midget.Rest in Peace.

My condolences to the Martin, Watson, and Jenkins family. God got a beautiful angel and friend. Rest in his loving arms Camille. Love u and family. God Bless.

To the children and family of Miget, we offer our condolences and prayers that God Almighty comfort your souls during this time of sorrows. Your mom was so gracious to our family at all times. We'll miss her dearly. Blessings

My heart, prayers and love travels across space and time. May the love of Christ saturate, comfort and keep you! Knowing she is in the arms of the one who loves her most is a blessing! Love you all!

My deepest condolences to the family and friends of a dear friend and classmate. Midget was a great friend and was always a pleasant person to all with the smile and laughter she shared. May you all have God's love wrapped around you during your lost and keep your lifetime memories of the beautiful person she was and will always be remembered.

To the family: Midget was a special person. She was always personable, kind and friendly. You are in our thoughts and prayers. May God give you strength in this time of sorrow.