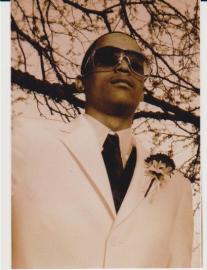 He was born June 18, 1991 in Coffeyville, KS to Alonzo Edwards Jr. (deceased) and Dana McCoy. He attended and graduated Independence High School.

Dominique was preceded in death by his father Alonzo, Jr. and his step-son Kayden. He is survived by his wife, Laurie Edwards of the home, two sons: Jayden and Carson; two daughters, Emma and Madisyn; Mother Dana McCoy; three brothers, Daryl Newton of Texas, Calvin (Michelle) Jennings of Independence, and Joshua Edwards of Tulsa; One sister, Autumn Jennings of Louisiana; a host of nieces, nephews, aunts, uncles, and cousins.

Dom your plate will still be set on all holidays you were family to us, you will be greatly missed but you are always in our hearts and thoughts, Love ya Dom I know you rest in peace no more pain