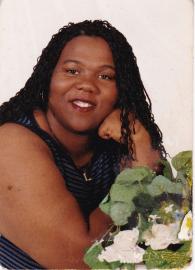 LaCrisha was born on August 19, 1982 in Tulsa, OK to Calvin and Cathy Mathews Clark.

LaCrisha was raised in Lenapah, OK where she attended school and graduated. She later moved to Oklahoma City and continued her education to become a CMA and a CNA. LaCrisha moved to Coffeyville and worked various jobs in the medical field.

She loved to socialize with her friends and family and also loved spending time with her kids and watching movies.

my cousin was the best and im so sad for her to go but it was her time ill watch your kids for you and make sure they will never do anything that you would like them to. fly high cuzzo