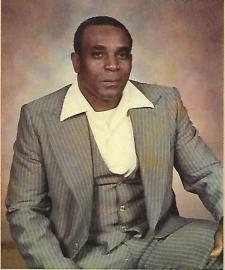 Leonard was born October 25, 1935 to Willie White and Aretha Walker in Coffeyville, KS. He was the baby of his family and he was the last of his siblings to leave this world.

He attended Cleveland School and was an avid sports player. He loved softball and volleyball. He had a favorite team in all division levels and if his team didn't win, it was because the referee made a bad call or that the other team cheated. Leonard was a team player and now he is on the best team ever. That is Team Jesus, and that team will always win.

Leonard served in the United States Army and received an honorable discharge in January of 1966. He traveled to many places around the world while serving his country in the army.

He married the love of his life, Clara Mae Marshall White, and they were blessed to spend 59 years together. Leonard and his wife loved fishing on the river banks. They loved relaxing, talking and snacking wihile waiting on the fish to to bite. Clara preceded him in death in February 2020. Leonard was blessed to raise one daughter with Clara (Kay Marshall Pouncil).

Leonard held many jobs as a laborer at Funks Mfg., Ivan Morrows, and Sherwin Williams before he retired from ill health.

He was a member of Greater Union Missionary Paptist Church where he served with the Brotherhood, sang in the choir, and enjoyed studying and learning God's word. He was a reowned quartet singer and had a beautiful fifth tenor voice. He was dutiful to the church until the very end.

Leonard was preceded in death by his mother, father, wife, five sisters, and one brother.

Leonard struggled with life after losing his wife of 59 lears. He pushed through each day longing to be with her and his family. On Sunday, January 9, the Lord called him home to be at rest with them.

He leaves to cherish his memories a daughter Kay (Phillip) Pouncil; grandson Minister Justin Pouncil of
Dallas, TX; and a host of nieces, nephews, cousins, and friends.