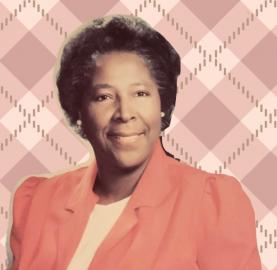 Mary was born March 7,1934 in Tulsa, OK an at the age of 1 moved to Coffeyville with her parents the Rev. Ovie and Annabelle Price.

Mary attended Coffeyville public schools and graduated from Coffeyville Community College. After graduation from CCC she married the love of her life, Tommy E. Wilson and to this union 5 children were born. Mary enjoyed sewing, travel, word games, and was a very competitive Scrabble player. In her professional capacity she held various administrative positions in both computer services and human resources.

As a lifelong member of the Church of God and Christ, Mary, an avid reader, biblical scholar, and church catechizer shared freely and passionately the word of God. During her lifetime, she served as the pianist, treasure, and in various other assigned roles. Recognized as an example of Christian and servant leadership, she was appointed as Church Mother and served faithfully in that capacity until her death.

Ms Mary was a wonderful person and gentile soul. Loved listening to her teach Bible class. She was an astute scholar. 'Mother' Wilson will be missed.

To the Wilson Family

I was sadden to hear of your loss of Mother Mary,There are no words i can say to ease your pain of sorrow .The Lord will give you strength as you look to him for comfort , I know shes up in heaven free from pain and worries for we all know Mother Mary was a God fearing woman who was not ashamed to say she was a woman of God and has finally received her reward , i say well done thy good and faithful servant. May God continue to bless your family and lift you all up in prayer.
again my sincere sympathy .

&amp;quot;Blessed are the dead that die in the Lord&amp;quot; There is no doubt our Church Mother is blessed. She lived the life that she Sang about. She was steadfast and unmoveable in her faith. First Church will miss this great woman of God. Rest in peace Mother, I'll see you in the Rature!!!

Our lives have been deeply Blessed to have known such a Beautiful Woman of God. We will always love and cherish her memory in our lives. Loved talking to Mother Wilson and making her laugh. May God comfort and strengthen you all at this time and in the future. You have our deepest sympathy and condolences .❤️❤️