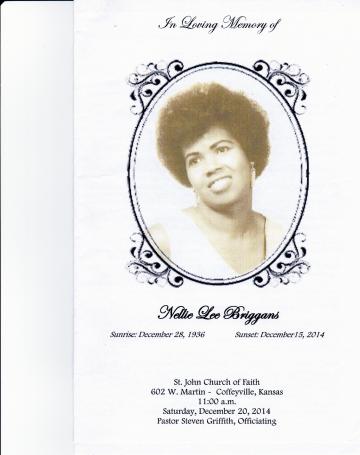 Nellie Lee Harriet Colman Briggans of Coffeyville Kansas passed away quietly at home December 15, 2014. Nellie was born on December, 28, 1936 to Maurice Coleman and Minnie Cecilia Smith. She was the sixth daughter of 8 girls. Nellie was formerly educated in the Coffeyville School System. Nellie went on to marry the love of her life Lawrence Briggans Sr. of August 6, 1955 this marriage was blessed until his home going November 19, 1990. Nellie worked various jobs, but her first job was a great homemaker and an excellent chef. She worked in the Hotel Industry for many years and she worked at Coffeyville Regional Medical Center where many of her friends and others would go to the cafeteria to get some of her famous fried chicken, orange chicken and some of her other treats, that only she could make. People would rather come to the hospital and eat her food rather than eat out at a restaurant. Her last job was at the Community Elementary School as a dietician. She really enjoyed seeing her great grandkids go thru the food line and they loved seeing their Great Nellie. Everyone that met Nellie was blessed to have her in their life. She was an inspirational person, great wife, mother, daughter, sister, aunt and grandmother to many. She was a devout Christian and a great Spritual Leader, Minster of Faith and Healing, and Guided people to be better. Nellie had that God given voice that made anyone who heard her speak the word would stop and listen to her words of wisdom. Nellie would make you feel so special in the worst of circumstances. Many members of our family and friends of hers, knew that she was a true kind hearted person who was there for you no matter what. Nellie was always cooking her great recipes and feeding the whole neighborhood. Nellie remained strong and steadfast even though her health was declining she still was a warrior of strength to others, but being the Virtuous woman that she was, her love for her children was her number one priority and if they were in pain she wanted to take the pain for them. Nellie leaves to cherish her two Daughters: Cecilia of Denver,CO and Maria Bell of Sacramento, CA; five Sons: Mallory (Shelia) of Mesquite, TX, Donovan (Nancy) of Denver, CO; Lawrence (Mary) of Coffeyville, KS; Wayne of Coffeyville, KS; and Leroy of Dearing, KS; 32 Grandchildren, 4 Sisters: Fern Roberts of Bentonville, AR; Jean Thomas of Wichita, KS; Cora Sayles of Dayton, OH; and Dorothy Starr of Coffeyville, KS, and numberous nieces and nephews. She is preceded in death by her husband Lawrence Sr., daughter Lorna, and her mother, father, and 3 sisters. Service: Saturday, December 20, 2014 @ St. John Church of Faith 602 W. Martin Coffeyville, KS 11 a.m. with Pastor Steven Griffith Officiating Final Resting Place: Fairview Cemetery

My dear dear Nellie.Just heard of your passing.Even tho I'm sad,I know you're better off than me.Was just sitting stating me sum &quot;Nellie&quot; grits with my oldest daughter when I got word you had left this world.You will b truly missed my friend.