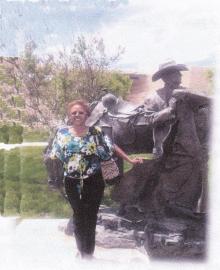 Patricia leaves to cherish her memory a host of family and friends.

So sorry for your loss, Pat was a &quot;jewel.&quot; Your entire family are in my thoughts and prayers.

Inez and I were schoolmates. I know first hand what a blessed and wonderful human being Inez was. Our prayers go out to the Reddins/Jennings family.

I was just looking at your Patricia (Pat) Inez Jennings Obituary site and see that your site has the potential to become very popular. I just want to tell you, In case you don't already know... There is a website service which already has more than 16 million users, and most of the users are looking for websites like yours. By getting your site on this network you have a chance to get your site more popular than you can imagine. It is free to sign up and you can find out more about it here: http://janluetzler.de/9zw - Now, let me ask you... Do you need your site to be successful to maintain your business? Do you need targeted traffic who are interested in the services and products you offer? Are looking for exposure, to increase sales, and to quickly develop awareness for your site? If your answer is YES, you can achieve these things only if you get your website on the network I am talking about. This traffic network advertises you to thousands, while also giving you a chance to test the service before paying anything. All the popular blogs are using this network to boost their readership and ad revenue! Why aren

OMG, I MISS YOU SO SO MUCH; YOUR LAUGH, YOUR SMILE, EVERYTHING. YOU WILL ALWAYS &amp;amp; FOREVER BE IN OUR HEARTS!!!