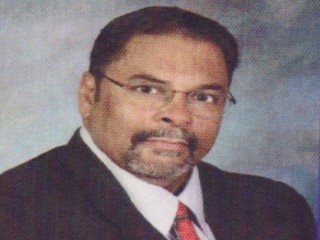 Virgil O. Horn Jr., the first born of two sons, was born to Virgil O. Horn Sr., and Ella Mae (Pemberton) Horn on April 23, 1951, in Kansas City, MO. At an early age, the family moved to Detroit, Michigan, where Virgil completed most of his education. In 1968, just before his senior year of high school, the family relocated to Ottawa, Kansas. Dr. Horn's remark concerning this move: "From the motor city to a rural city-- what a culture shock"

Dr. Horn has been the pastor of Sardis 1st Missionary Baptist Church for 28 years. He served as the Second Vice-President in the Kansas State Missionary Baptist Convention for five years. Dr. Horn's civic activities include the Coffeyville branch of the NAACP, (National Association for the Advancement of Colored People), former member of PINCH, (People for Institutional and Communal Harmony), the Coffeyville City Commission, where he served as Mayor of Coffeyville for three years, the Field Kindley High School Site Council, CAC (Citizens Against Crime), the League of Kansas Municipalities and the Governor's Task Force on Racism. In 2004, Dr. Horn was cited by the Coffeyville Chamber of Commerce as Educator of the Year, and in 2013 served as President of the Coffeyville Ministerial Alliance.

Dr. Horn was employed by USD # 455 for 22 years, 15 of which he was director of NADO (New Alternative Direction Opportunities), a school for students who struggled in a regular classroom setting and was founded by Dr. Horn.

Virgil Horn was preceded in death by both his parents and his brother, Vernell Horn. However, he leaves to cherish his memory his loving wife of 25 years, Paulette, eight children: Tyronne (Barbara) Burnett, Rahshae DeCasta, Amber (Kendall) Bean, Christopher (Tavorra) Horn, Michael (Jamie) Horn, Jacquelyn (Marvin) Henderson, Phillip (Kayela) Horn, and Matthew Horn, 24 grandchildren and a host of other relatives, dear friends and loved ones.

My condolences to the entire family. Virgil was a fine man and an inspiration to so many people. He will be missed by all who knew him. You are in my thoughts and prayers.

MAY GOD NE WITH THE HORN FAMILY BE BLESSED. ROSIE REAVES

Our prayers are to Paulette and the rest of the Horn family. God said in his word that he would never leave you comfort less. Keep your hands in the hands of the master and everything will be alright. God bless you and may God continue to keep you.

Paulette, I am so sorry to learn of Virgil's passing. You and your family will be in my thoughts and prayers.

We are honored to host Dr. Horn's funeral service. Virgil was a friend, colleague, and brother in Christ. We enjoyed his pleasant demeanor and his deep knowledge; above all else, his faith in Jesus Christ.

Our blessings and deepest condolences to his family, to his church family at Sardis First Missionary Baptist Church, and to all who mourn his passing.

Blessed are the dead who die in the Lord from now on.” “Yes,” says the Spirit, “they will rest from their labor, for their deeds will follow them.” (Revelation 14:13)

I was just searching this morning after work for a good telephone number to reach Dr Horn at. He put me on the right path and taught me at NADO how to believe in myself. He used to say things like &amp;quot;I'm so proud of you&amp;quot; or Come on miss Ann-Marie, you're very smart, I know you can do this&amp;quot; and &amp;quot;I believe in you&amp;quot;
I realize Dr Horn was this way with everyone, but the condition I came to his class in was rather mangled most days. I was between 6&amp;amp;9 months of having my first child, in an abusive relationship, and too far from home. The impact that this man's kind words had on my life is one that I will cherish all my days... Fly high with the angels good Dr. you will be dearly missed untill that faithful day when we all see you again in heavenly father's house... Oh what a happy reunion that will be :) if you find time, hug Jesus fr me, look down on my with God by your side, and if it's not too much to ask, Pray for me as I will be praying for you. Rest in peace my good doctor...

To: Paulette &amp;amp; Family:
Rev. Horn was truly a very encouraging person to our family and Dorthy Hendrix family. He was there during our fathers' death and gave full support during our mothers' Alzheimers and her death. We all loved Rev. Horn and Paulette &amp;amp; family. We will miss him but find peace &amp;amp; encouragement that he no longer is suffering with his illness. Our deepest condolences to all the family. We will be there!

I have fought the good fight, I have finished my course, I have kept the faith. 11Timothy 4:7. I was very saddened to hear of the passing of Rev. Horn. I was blessed to be a member of his congregation. He was a kind and compassionate man of God. His presence will be missed by all who knew him. My sincere condolences to Paulette, his children and grandchildren. May God’s grace and mercy strengthen you in the days ahead.

To: Sister Paulette Horn and family.
&amp;quot;But as it is written, Eye hath not seen, nor ear heard, neither have entered into the heart of man, the things which God hath prepared for them that love him.&amp;quot;
I Corinthians 2:9

The life and legacy of Pastor Horn will remain in our hearts. We are thankful to God that he and Sister Horn were our daughter's spiritual watch-care leaders as a student in college. As we traveled many years going to Tulsa for my wife treatments, it was his testimonies and words of encouragement as well as Sister Horn's support as a caregiver to be a blessing to us both. It was through his sickness I was reminded of the man Job in the Bible, he never lost his integrity while going through the testing of his faith. He will be greatly missed by our family. We love you Sister Horn and are praying for your strength as the days go by. Continue to look unto Jesus the author and finisher of your faith. Our deepest sympathy and love to the entire family, Pastor Rev. &amp;amp; Sister Nathan Jones and the girls, Nayletha &amp;amp; Nayshona. Along with our congregation at Bethel Baptist Church, Kansas City, Kansas.

Dr. Horn was such an inspiration and a God fearing man. He impacted many lives and will be missed on this world, but those who follow Jesus will surely see him again! Or prayers are with you, his family.

My deepest sympathy for your loss of Virgil. Jesus says&amp;quot;I am the resurrection and the life .He that exercises faith in me,even though he dies will come to life&amp;quot; John 11:35.