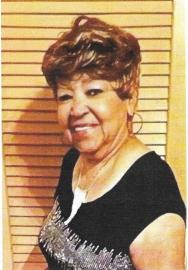 Alene was born on August 5, 1944 in Chanute, KS to the late Dwight Sr. and Thelma Ambler. She attended the Chanute Public Schools.

Alene married Jack Morrison May 15, 1960 to that union 3 children were born, Michelle, Thane, and Travis.

Alene was a member of Sardis First Missionary Baptist Church where she was the current Financial Security, a former choir member and secretary.

Alene was employed by the City of Coffeyville until her retirement in 2006 where she was known also for her delicious cooking, loving demeanor, giving spirit and for overall being a strong woman who had a big heart with open arms and a big smile to match.

Alene was preceded in death by her parents, her husband and three children, her sister, Jane Hertz, Bayshore, NY, three brothers, George, Dwight, and Oliver, and a granddaughter (Sierra Morrison), whom she also raised.

We were sadden to hear of Alenes' death.She was a good friend to all our family and will be missed so very much. Alene &amp;amp; my sister, Dorothy Hendrix worked together many years in the church. Our continued prayers to ALL of the family.
God Bless!

My sincere sympathy at the loss of my friend Alene. She was a great friend and a great lady. She loved her husband and children and gave unselfish of her time and talents to her family. Alene loved the Lord and supported Sardis very well. I will miss our conversations and many laughs.

I'm so sorry for your loss. I just seen this. She was such a good
friend. She will be missed ny all who knew her.