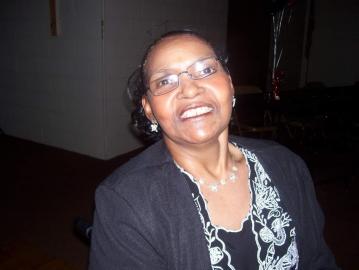 Bretta was born in Coffeyville, Kansas on January 31, 1952 to the late Doris and Griffin Irving. Bretta lived wonderful vibrant life graduating from Field Kindley High School and later going on to complete her Bachelor's degree in Nursing from Pittsburg State University and working as a nurse at Coffeyville Regional Medical Center for 21 years before retiring in1994.

Griffin,
So sorry for your loss! We are sending prayers your way!

Please know that you all are in my thoughts and prayers. Bretta was such a dear and wonderful person.

Our prayers to you and all your family. Bretta was a beautiful person. She was a dedicated nurse and a good friend. May you have peace knowing she is with Our Heavenly Father.

To the family of Bretta,
We are so sorry for your loss! Bretta will truly be missed. She was alway's so sweet, kind and thoughtful! We are so sorry we could not be there to celebrate her life with you but we will be there in spirit, thought and prayer. Sending our love!!!!!

Bretta you were quite the Lady and a wonderful nurse. It was an honor and pleasure to have known and worked with you. I will never forget you, you were a big part of my going into nursing. Rest in peace my friend. I will see you again my friend. Love and Prayers to your family. Marge

Mr. Walker, Griff, and family,
I am so sorry for your loss. I will be in much prayer in the days to come. May you feel God's presence and grace. May He comfort your hearts and bless you with wonderful memories that bring help in this difficult time. Love to you all.

Carlos, we are so sorry for your loss, pray God will wrap his arms around you and give you peace and strength now and in the future. Our prayers are with you and your family. May he comfort you with great memories to help you thru the difficult times. God bless You!!

Bretta you will be greatly missed I love you, God has called another Angel home.

Carlos, my deepest sympathies on the passing of your dear wife Bretta. Although I never met her I know she had a strong and caring partner. She has passed from your love and care to our lord's. You and your family are in our prayers.
Doug

Bretta Jo, your sister Lu has gained her wings, she’s left me here all alone to deal with our brothers, you know they’re a handful. She was always hard headr, you know your sister. Please welcome her with open arms, she’s had a rough few years but God knew she was tired! Save a place for me, I love you both very much!