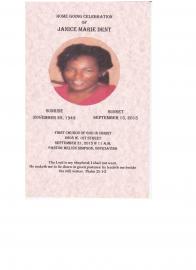 Janice M. Dent went to be with the Lord on September 15, 2015 at the Winfield Senior Living Community.

Janice was born to Daniel R. Dent and Lula Mae Boganey on November 22, 1949, now she has gone to join them. The love she has shown and given to us all is unforgettable. Never has she been a selfish person, but the opposite. She always wanted everyone she came in contact with to know right from wrong, and to always show love no matter how they did you. A true soul she was and her heart was always open.

Janice was born and raised in Wichita, KS and later moved to Coffeyville ,KS and started her life. Working for companies like Southwestern Bell, Wal Mart and Medical Lodge Nursing Home and starting her own family.

Janice was preceded in death by her parents Daniel and Lula Dent and Sister Beverly J. Lydia.

Janice leaves behind to finish t work she started: 3 kids; 2 so Dwayne Dent and Dwight Dent and 1 daughter; Angela Thomas; 3 sisters, Gladys Peters, Jessie McDaniel and Lillie Folks; and 1brer Elder Tommie Dent. 2 grandkids Alexis Dent and Elijah Dent and a fourth generation Chasity Mae Dent and other grandbabies, loving nieces and nephews, and lots of cousins. A Special Thanks to her nephew Trence Robinson who no matter what stood by her side.