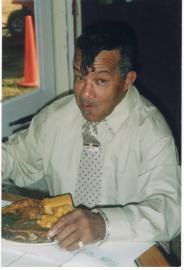 Donald was born August 19, 1936 to Charles and Clar Colbert.  He attended Coffeyville public schools before enlisting in the U.S. Navy.  Donnie returned home to Coffeyville and was employed by Sherwin Williams Chemical and later by Farmland Industries until his retirement.

Donnie was a member of St. James United Methodist Church and was faithful in his visistaion with the sick and shut in.

Donnie was preceded in death by his parents Charles and Clara, four brothers: Marland, James, Pearl, and Nathaniel and one sister Elizabeth.

To the Colbert Family,

May fond memories bring comfort to you and friends and family support during this difficult time. Jerry Bradford-&quot;Class of 55&quot;