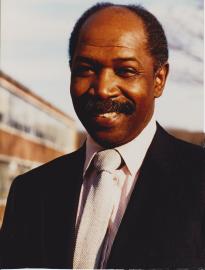 Paul was born on March 30, 1942 in Coffeyville to the late Ovie and Annabelle Price.

Paul accepted Christ as his Lord and Savior at an early age and was a member of First Church of God in Christ Family Worship Center.

Paul grew up in Coffeyville, attended Cleveland, Roosevelt, and Field Kindley Schools before the family moved to Stamford, CT, in 1958.

Paul completed his secondary education in the East, graduating from Rippowam High School in Rye, NY.

While at Three Rivers, he was President of the Board of Directors of the Literacy Volunteers in Norwich and was elected to serve as delegate to the White House Conference on Libraries and Information Services, Washington, D.C. After retirement from Three Rivers, Paul returned to Coffeyville in the early 2000s.

In 2007, Paul earned yet another Bachelor of Science degree in Church Administration and Leadership from Oklahoma Wesleyan University, Bartlesville, OK.

At the time of his death, Paul held the positions of Superintendent of Sunday School, Chairman of the Trustee Board, and Teacher of the YPWW at First Church of God in Christ Family Worship Center. Paul also served as Secretary for the local PINCH (People and Institutions for Communal Harmony) and he served on the Community Advisory Board for the Coffeyville Police Department. He was a former USD 445 Board member and served on the Board of Directors for the SEKAN Chapter of the Boys and Girls Clubs of America. He was also the Board of Directors for the Coffeyville Public Schools Foundation.

Paul was a world traveler, enjoyed reading, volunteering, and spending time with family and friends.

My deepest sympathies goes out to the family and friends we all loved Paul very much he will always be in our hearts.

Family, we know the Lord's grace will see you through. Paul is now secure in the presence of God.
Blessings to you all. You're in my prayers. ej

We are sorry to hear about Dr. Price. He had many friends back here on the east coast and we knew nothing about his departure. May the family find peace and may his soul rip. GOD knows what’s best and it must have been PSP’S time to visit the Lord. Our condolences to Paul’s family and friends. Y’all be blessed.

We are so sorry about are old friend Paul. My sympathies go to his family...... BUTCH....