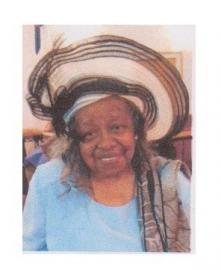 Maxine A. Dixon, 95 of Coffeyville, transitioned to her new home on Tuesday, September 4, 2018.

Maxine cherished her many positions. She retired after 24 years from the Kansas Ammunition Plant. She was also self-employed as a beautician. After retirement, her work continued in the community, where she served as a Girl Scout Leader and later in the leadership of the Coffeyville Senior Retreat. In addition, she was a Life Member of the NAACP.

Over the years, Maxine always loved fishing and working her word puzzles. She truly loved taking pictures and was known as the "photography lady".

Maxine was married to Harry J. Dixon in December, 1947, and remained married until his death March, 1993. She was preceded in death by her parents and her two brothers, Edward and Ernest Reddins.

Graveside home gong service will be at 11 a.m. on Tuesday, September 11, 2018 at the Fairview Veteran Memorial Patio.

Marian, Harry and family. Mrs. Dixon will surely be missed. You all were so blessed to have each other for so many years. You are in our thoughts and prayers. We extend our condolences.

Sending our thoughts of you and Harry! Peaceful prayers! I know that she’ll be missed by all! Love

My prayers and condolences to the family. I will always remember Mrs. Dixon working with the young people at Calvary Baptist Church and walking by the house on my way to church. An angel right here on earth and now will receive her wings. God be with you all and be your comforter during your loss. Love to you All.
From The McIntosh and Neal, and McAlester family members.

I carpooled with Mrs. Dixion. She taught me so much and had a sense of humor that kept me laughing. She was a bright light to a troubled world. Than You God Amighty, I graced her path.