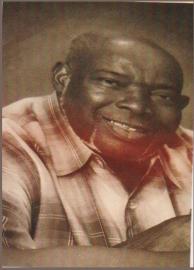 Longtime Nowata, OK resident James Lucky, 84 was called home to be with the Lord on Tuesday, November 29, 2016 at Jane Phillips Nowata Hospital.

James was born on June 11, 1932 to Luther Lucky and Mary Scott Lucky in rural Wagoner, OK. His mother died when he was an infant, leaving his father to raise him and his sister.

After graduating from Wagoner High School, he enlisted in the U.S. Army on July 26, 1950 and transferred to the Army Reserve on December 25, 1952. After serving in the Korean War, he received an honorable discharge on October 17, 1956.

He settled in Nowata and never left, first living with his uncle George Lucky and then purchasing his own home. He worked for Missouri Pacific Railroad for many years. After leaving the railroad, he worked as a construction contractor for CNE Co. and BMW Co., helping to build the Public Service Company of Oklahoma plant in Oologah, as well as other construction projects. He was a member of the Laborers'' International Union of North America Local 107.

James never "retired" he was always working, whether it was plowing gardens, brush hogging lots, hauling gravel or removing snow from driveways, streets and parking lots. He never missed an opportunity to work, even when he had to use a stepladder to get up into his dump truck. He also never passed on an opportunity to help someone.

Each planting season you could count on him to have a garden, welcoming family and friends to come pick vegetables. Around Nowata, he was affectionately known as " Uncle Lucky" and around Coffeyville, he was everyone's "Grandpa Lucky".

He joined 1st church of God in Christ Family Worship Center in Coffeyville, KS. He remained an active member until the time of his death, rarely missing a Sunday service.

We will miss Mr. Lucky. He was always the nicest and sweetest gentleman we knew. If you needed help, he was there. He will be missed by a lot of people.

My Prayers are with the Family at this time

He was a good man and a good neighbor
Rip Lucky.. We love you and you will be missed
.