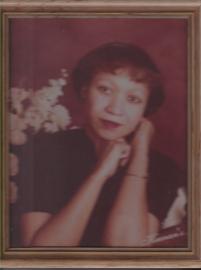 On January 21, 1952 a baby girl was born to Nathaniel and Edna Jean Alston Dennis and they named her Sylvia Ann Dennis.

Sylvia attended Field Kindley High School graduating in 1970, then she attended Coffeyville Community College graduated with the class of 1972.

Sylvia was employed by Coffeyville Regional Medical Center for 20 years as a nurse aide then worked at the Senior Services of Southeast Kansas.

Sylvia worshipped at Bethel African Methodist Episcopal Church where she served as a Stewardess, and Usher and a Member of the Choir. Sylvia enjoyed spending time with family going to games to see her cousins playing football and soccer.

Sylvia was preceded in death by her parents Nathaniel and Edna Jean Alston Dennis.

Sylvia leaves to cherish her memories: Sister Linda Dennis of Tulsa, OK and Brother Jerry Dennis of Coffeyville, KS One Uncle Calvin Alston and other relavices and friends.

I worked with Sylvia at CRMC, she was a wonderful CNA, and you could always count on her for anything, had a great laugh &amp;amp; sense of humor too, well God definitely has received another angel. May she RIP.

Linda and Jerry thinking of you. It was nice to get to know and spent time with you. Sylvia gave it a good fight. Sorry I didn't know her before. Head so many nice things about her. May God gave you all peace. My thoughts and prayers are with you.

Linda &amp;amp; Jerry No time on earth is long enough to share with those we love or to prepare our hearts for that last good-bye.

even though there has been a long time to prepare for this,it's still difficult to except when it finally happends. HOPING YOU CAN FIND COMFORT THROUGH MEMORIES OF THE WONDERFUL PERSON YOU KNEW.

No time on earth is long enough to share with those we love or to prepare our hearts for that last good-bye.HOPING YOU CAN FIND COMFORT THROUGH MEMORIES OF THE WONDERFUL PERSON YOU KNEW.WITH DEEPEST SYMPATHY. Bobbye Blackwell,Millie Joan Adams,Clennie Gillispie, Ora Swain,Savannah Clayton.