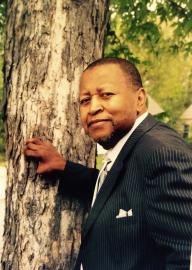 Born William Emmett Wardell Martin is the youngest child of eight. He was born August 19. 1960 to Herbert Martin Sr. and Willie Martin in Coffeyville, KS. He attended school in the Coffeyville public school system. He was proud to be a member of the 1978 graduating class of Field Kindley High School. As a child he enjoyed baseball, pool, home cooked meals and family time.

Wardell, the big little brother, was the youngest of eight siblings. Their father taught them harmony and gave each one a love for gospel music. He and his siblings exemplified some of the best musical talent within the community, known as the Martin Singers.

Wardell always enjoyed playing games with anyone who was ready for the challenge. He boldly called himself "The Teacher". Therefore anytime Wardell lost a game he quickly insisted he was "The Teacher" and challenged the opponent to another game. While playing, Wardell would gain eye contact with a sweet smile. He would remind you over and over again and slowly say, tea-cher, tea-cher, tea-cher....... Wardell was an avid fan of Coffeyville Red Ravens, Dallas Cowboys, KC Royals, and LA Lakers. He enjoyed baseball and basketball and loved giving tips and coaching from the bleachers. He loved to travel and could navigate successfully in any city. Every city he visited he make new friends or crossed paths with an old friend.

At a young age he accepted Christ into his life. His God given gift for music gave him the unique ability to usher in the presence of the Holy Spirit. He was very adamant about giving God the praise and would insist that the Saints get on their feet and praise God. Wardell enjoyed playing the drums and maintained the position for many years. He divided his talent between playing drums and singing. After singing in the choir for many years he accepted the position of Minister Of Music at First Church of Christ. He was a dedicated vocalist and had a unique powerful voice. He served as a Deacon for approximately eleven years, enjoyed Sunday School and inspired others to use their talents. He would often say "Let's Have Church " and sometimes "Come On, Get on Your Feet"!

This will be a time for family and friends to share their brief expressions of love as well as condolences.

Wardell will be greatly missed.

Mike and I are so sorry to hear about Wardell. He was such a kind, loving man and will be missed by everyone who know him. We will keep you in our thoughts and prayers.

Dear Family,
I am so sorry to hear of the loss of your dear loved one and send you my sincere condolences. May you find comfort from God's word at Revelation 21:3,4. Heartfelt prayers are with you and your family.

Spent alot of my youth playing ball with Wardell! A good friend indeed! I will miss him! See ya soon Wardell! Big A

Wardell may you Rest in Peace my friend. I thank you for all the joy and laughter you brought to so many during our years in high school and beyond. I know you will be missed. To the family, my thoughts and prayers are with you. God Bless. Wardell is in a most beautiful place with loved ones before us. Until we meet again.

A great friend! That will be truely missed. My prayers go out to the fsmily.

I am saddened to learn of Wardell's passing. I first met Wardell as an 8th grade student in my English class at RJH. What a nice young man who grew into a wonderful adult. He will be greatly missed. My condolences go out to his family, especially Artonza.

We send our heartfelt love and prayers during this time of grief. May your memories of your loved one live on forever!

To Artonza, My prayer is that God will give you Peace in time, And my &quot;sincere Condolences go out to the entire Martin Family. May God continue to Bless you all!!

My sincere condolences to the entire family RIP Wardell.

Condolences to the Family Wardell was always a big Red Ravens support when I played for CCC. Every time I came back I would look him up.. RIP Wardell