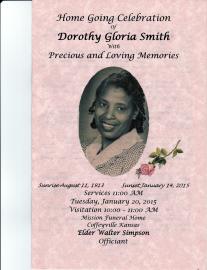 Dorothy G. Smith age 101, was born on August 11, 1913 to Bennie and Violet Powell Jones in Coffeyville, Kansas where she lived the first 6 years of her life with her aunt and uncle.

In 1918 her parents moved to Chetopa Kansas but she continued to live with her aunt and uncle in Coffeyville for another year before joining her parents in Chetopa.  There she grew up with her four brothers and four loving sisters and was educated in the public school system.  Her parents, brothers and sisters all preceded her in death.

In 1935 she and her family moved back to Coffeyville, where she spent the remainder of her life.  She was affiliated with Bethel A.M.E. Church.  There she served as President of the Stewardess Board # 2, was a member of the Missionary Society and worked with the Willing Workers.

While in Coffeyville, Dorothy had a daughter, Madelyn Stone (Bill).  She soon met the love of her life Marvin Smith.  They married on February 29, 1934.  To this union they had two daughters, Betty Porter (Newton-affectionately known as Bud) and Arlene Fisher (Freddie).  Her husband, daughters and son-in-laws all preceded her in death.

In 1940 Dorothy joined Prince Hall Chapter # 17 Order of the Eastern Stars in Chetopa, KS.  She demitted from Golden Circle Chapter # 31 O.E.S. in Coffeyville in 1943.  She served as Worthy Matron in 1953, and also served as Grand Warden of Prince Hall Grand Lodge, Kansas Jurisdiction.  She has been a member of the Order of the Easters Stars for 62 years.  She was a charter member of the Birthday Club and served as president from 1980 until the end.

Family was always the center of Dorothy's life. She loved traveling in fact she visited every stat in the United States except for four.  She really enjoyed visiting her daughters and grandchildren in California.

Dorothy Gloria Smith departed this life on January 14, 2014 at Windsor Place in Coffeyville.  She will be greatly missed by all who knew and loved her.

She was a very special woman. She took care of my mother when she was little and my mother (Nancy Low) always claimed she was her 'real' mother. She will always be treasured and missed.