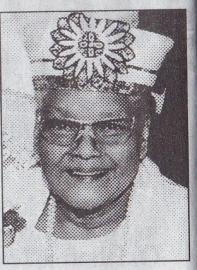 Rev. Earline Joyner Clairborne 90, of Ithaca, NY. and a longtime Coffeyville resident. died January 2nd at Beechtree Center for Rehabilitation and Nursing in Ithaca.  Memorial service was held on January 10th at Baptized Church of Jesus Christ in Ithaca.

Rev. Clairborne was born February 14, 1924 in Coffeyville, the daughter of Thomas and Lily Reed Joyner.  She lived in New York City in the 1940's where she worked in retail and also with the police department, while leading a Girl Scout Troop.  While there she met her husband, William {Bill" Clairborne Sr., who became a Coffeyville Police officer when the couple moved there in the mid-1950's and advanced to assistant city manager.

Rev. Clairborne, known affectionately as "Aunt Flookie" to many was well known for working with Coffeyville's children, especially the city's black youth.  She started the city's first black Girls Scout Troop and in the 1980's started the Magical Hotshots basketball team.  She taught tap, ballet, jazz dance and modeling from the late 1950's to the 2000's with  the Clairborne Models, Clairborne Drill Team and later the Clairborne Dancers, who performed at parades and special events.  She also started a youth gospel choir and founded the Miss Bronze scholarship pageant.  All the while she served as a tutor for many students, especially those designated as learning disabled.

Earline was a member of the Order of the Easter Stars, Golden Circle Chapter 31.  She was also a life long member of Bethel A M E Church as a choir member and working with the youth.  She was ordained as a minister in the African Methodist Episcopal faith in 1998.   She moved to Ithaca, NY in 2007 to be near her son William "J.R." Clairborne Jr., where she was active with Baptized Church of Jesus Christ.  She moved to Beechtree Center in 2011 due to Alzheimer's disease.  She adopted Patricia "Princess" Parrish while living in New Your and helped raised her son, Nathaniel Parrish.

Dear William ( Rod to me)
Your mother was a very special lady while in
Coffeyville. She did so much for so many people.
I send my deepest sympathy to you and your family.

I was so sorry to hear of Mrs. Claibornes' passing. She was like a second mother to me. She let me stay with her when I needed to complete the sixth grade before my mom came and I moved to California. She was a very special lady to me. I will always be greatful for everything she tought me when I was in the drillteam and with her she will be with me always.