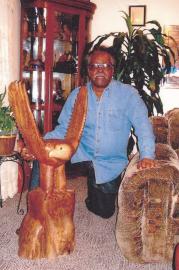 Donald L. Morrison (Jack) went home to be with the Lord on January 21, 2015 at Coffeyville Regional Medical Center.

Donald was born to Hillard and Glatha (Martin) Morrison on March 24, 1934 in Coffeyville, KS.  He received his education in the Coffeyville, KS school system attending Cleveland Elementary and graduated from Field Kindley High School in 1952 and Coffeyville Junior College in 1954.  After graduation he enlisted in the United States Air Force where he played football and ran track.  Upon his discharge in 1959 Donald was drafted into the San Francisco 49er's but instead he chose to return to Coffeyville and further his education at Pittsburg State University where he majored in Art Education and Physical Education.

On May 15, 1960 he was united in marriage to Alene Ambler in Chanute, KS.  To this union three children were born.  One daughter Michele and Two sons, Thane (T-Don) and Travis.  Donald, better known as Jack, never met a stranger, he made friends everywhere he went.  He seemed to be a man of few words, but if you knew him you knew he wasn't.  He was full of life and love and he had nicknames for everyone he knew.  He was a deep thinker and a humble man.  And when he spoke it was words of wisdom, laughter and love.

Donald was a lifetime member of Sardis First Missionary Baptist Church, where he served faithfully as Deacon, Board member and Choir member.  Serving the Lord was the most important thing in Jacks life.  The Second most important was his family, he always made time for what mattered most to him.  He was known to be a very energetic person who loved the lord and loved life.  Donald was a master woodcarver, avid bowler on many leagues, and loved to ride his motorcycle.  He also loved to read novels particularly western and like to watch them on TV as well.  He loved sports of all kind especially football, of course his favorite team was the San Francisco 49er's.

Jack was employed at Junge Bakery in the early 70's and later went to work for Farmland Industries until his retirement in 1994.  The he became caretaker at the James Tyeska Youth Activity Center for many years and up until his death was the Cross Guard for USD 455.  Where he was greatly loved and appreciated by the community.

Visitation will be Friday from 10 a.m. to 8 p.m. and the family will be receiving friend from 6 p.m. to 8 p.m. at Mission Funeral Services Chapel.

I found the verse below that I have kept for years. I turn to it from time to time and just wanted to share it. God Bless You in your time of sorrow and loss. You know I am just a &quot;shout out&quot; or phone call away, always.........
God saw you were getting tired and a cure was not to be, so he put his arms around you and whispered &quot;Come with me.&quot; With tearful eyes we watched you quickly fade away. Although we loved you dearly, we could not make you stay. A golden heart stopped beating, hard working hands to rest. God broke our hearts to prove to us he only takes the best. It's lonesome here without you, we miss you more each day. Life doesn't seem the same since you have gone away. When days are sad and lonely and everything goes wrong, we seem to hear you whisper &quot;Cheer up and Carry On.&quot; Each time we see your picture you seem to smile and say &quot;Don't cry, I'm in God's hands - We'll meet again someday.&quot; A million times we've missed you and a million times we've cried. If love could have saved you - You never would have died.

Alene...Earl and I were so sorry to hear of Jack's death. We considered him one of our best friends. We know he will be missed by everyone. Love and prayers from us to you all.